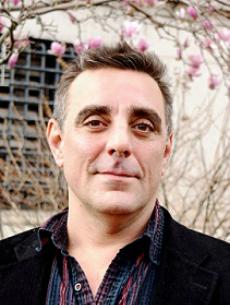 Vincent Aurora (Regis High School, NYC, 1985; Georgetown University, BA 1989; Columbia University MA, MPhil, PhD 1998) has been a lecturer in the French Department since 2001, a position that has allowed him to remake pre-existing courses and to create entirely new courses to respond to students' changing needs, particularly with the French Cultural Workshop and Accelerated Second Year French I + II, both in New York, and at Columbia’s Reid Hall program in Paris.

The author of one book of literary criticism (Michel Leiris’ “Failles”: Immobile in mobili) and translator of Prince Michael of Greece's “L’Impératrice des Adieux”, he has written extensively on the use of metaphor in Surrealist poetry, the combination of Auguste Comte’s Positivism and quantum mechanics in Houellebecq’s “Les Particules élémentaires”, and the method of passages parallèles and its ramifications on the interpretation of poetry.

Since 1996, he has been a yearly contributor to the Encyclopedia Britannica's yearbook on works of each year’s French literature.  His most recent article, “Enseigner la culture à l’aide de la Constitution française”, on using the first article in the French constitution to introduce students to a wide range of aspects of French society, from the impossibility and yet existence of affirmative action, to laïcité and the question of the Muslim headscarf, to feminism and the relation of the minority to the majority, appeared in October 2016’s French Review.