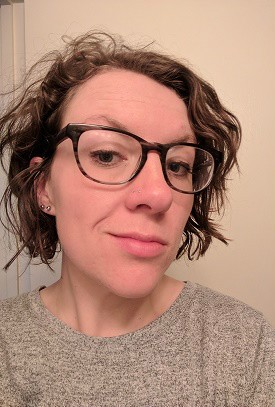 Aubrey Gabel (PhD, UC Berkeley) is a specialist in 20th- and 21st-century French and Francophone literature, culture, and film. Her fields of research include formal experimentation, literary groups and avant-gardes, sociologies of literature, gender and sexuality studies, translation studies, and visual culture (especially comics and graphic novels). Professor Gabel has articles and critical and literary reviews published or forthcoming in Studies in Twentieth- and Twenty-First Century Literature, SITES, Comparative Literature, French Politics, Culture and Society, Romanic Review, Public Books, and the Bulletin of Francophone Postcolonial Studies. She also serves on the editorial board of Romanic Review.

She is currently finishing a book manuscript Seriously Ludic: Contemporary French Authors Playing Politics, which investigates how postwar French authors use literary ludics to interrogate the larger political crises of late 20th-century France—like May ’68 and the Algerian War, the rise of French feminist, Maoist and Third-Worldist groups, the collapse of French Communism, and the growth of far-right nationalism. Because ludic authors do not form a cohesive genre, group, or movement, or limit themselves to ludic writing, they have largely been left out of the story of French postwar avant-gardism. Far from an era that could politicize Surrealist antics, the postwar period is marked by a renewed skepticism with respect to the political potential of form, despite the irreverent playfulness of May ’68 protestors or Guy Debord and the Situationists. Writers like Georges Perec, Monique Wittig, Jacques Jouet, and François Maspero were often perceived as somehow lacking—either “too political” to be formalist or “too formal” to be political. They sometimes distanced themselves—or were ostracized—from mainstream political venues, living on the outskirts of organized political practice, in Communist community theater or utopian artists’ colonies. Ludic writers experiment with constraints (limitations placed on texts), procedures (limitations on the time/space of writing), and postures (modes of self-presentation in the literary field). In this way, ludic writing documents lost histories, like historical lesbian leaders and intellectuals, and disappearing communities, like the Communist red belt of suburban Paris or ex-Communist Eastern Europe. Literary ludics are also a strategy, which allows authors to act as free agents, or relatively autonomous actors, free of aesthetic demands of the literary field, or to enact an exit strategy, or a means of escaping the dominant postwar model of Sartrean engagement and its close ties to the French Communist Party.

At Columbia, Professor Gabel teaches in the Core Curriculum, as well as undergraduate and graduate courses on 20th- and 21st-century literature, culture, and film. Recent course titles include, “Violence, Politics, and the Graphic Novel,” “Sex, Drugs, and Marxism,” and “Postwar French Cinema and Bad Taste.” Before moving to Columbia, she taught at the UC Davis, UC Berkeley, CU Boulder, and Paris VII. She has received fellowships from the Heyman Center for the Humanities, the Berkeley Language Center, the Dartmouth Center for French Cultural Studies, and the Andrew W. Mellon Foundation, as well as a Lenfest Junior Faculty Development Grant. Outside of academia, she is a freelance translator and interpreter, with interests in oral history.